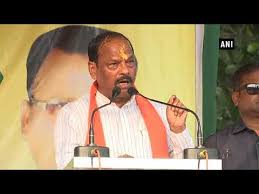 Jamshedpur, Oct. 13: During his whirlwind tour to different parts of Kolhan, Chief Minister Raghubar Das on Sunday promised to make Chakardharpur a different district by February, 2020. Addressing the Kolhan leg of Johar Jan Ashirwad Yatra at Chakardharpur, Das said that if voted to power the State Government will carve Charkardharpur as the new district.

Taking a dig at the regional parties, Das said that Jharkhand could not become a separate state in 1993 because of the Jharkhand Mukti Morcha. It was the then Prime Minister Atal Bihari Vajpayee, who kept the promise made to Jharkhand and gave a separate statehood status. “Keeping this in mind, I promise that voted to power Chakardharpur will be made a separate district by February 2020.

Targeting the Soren family, Das said that guruji and his son has served as Chief Minister and Deputy Chief Minister but they worked to sell Kolhan’s mineral wealth to other states and countries. They did nothing for the development of the State.

Addressing a public meeting at Goilkera, Raghubar Das said that JMM has forgotten the martyrs. BJP has worked to honour the sons of the soil.

Das announced that on the demand of youths Goilkera-Gudri road will be constructed. For 14 years, development was disrupted in the State due to political instability. But after 2014 there has been a stable and strong government.

Das said that his Government has brought the State on the path of development during his five tenure of Chief Minister of Jharkhand. He went on to add that the people of Jharkhand will vote on the basis of his performance and he is confident to win in the elections.

The Chief Minister noted that the party’s vision is making Jharkhand a developed state. “We are promoting agriculture and industry together. We want to build basic infrastructure in the state apart from improved health-care facilities,” said Das.

The Chief Minister said that the state was making steady progress in making it one of the vibrant states in the field of industrial development. “Jharkhand government has framed policies to provide technical education and skill development. We have to just ensure that these policies are implemented. The need is to bridge the skill gap between the industry and the skill provider,” he said.

“We will ensure that mineral-abundant Jharkhand develops as number one state of the country,” he said. Das said the government is working efficiently in bringing speedy development, providing basic amenities and improving policing. He also said that ensuring corruption free governance has been his foremost priority.