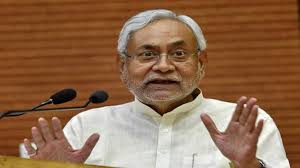 The Bihar Cabinet has approved the revised sand mining policy as per which an applicant can get licence for a maximum of two sand blocks.

As per the draft policy, now a single person or a registered company, partnership firm or a cooperative society can obtain license for a maximum two sand blocks/ghats or 200 hectares of sand mining area, whichever is lower, the principal secretary said.

Any person now can get maximum of two sand blocks allotted provided such mining area is not spread over 200 hectares of mining area either in one district or any other district, he said adding that now the government has set a limit for getting sand blocks.

The draft policy has also treated rivers in district as a separate unit for allotment of sand blocks, the principal secretary said.

Altogether 19 decisions were taken in the cabinet meeting.

The cabinet also decided to reserve one per cent of quota for people performing well on national and international sporting events in the selection of constables in Bihar Police, he said.It also sanctioned a revised estimate of Rs 108 crore for providing piped drinking water in arsenic affected villages of Maner in Patna district, he said.