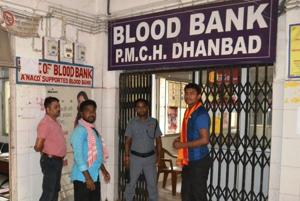 An unprecedented crisis in blood banks of medical colleges and hospitals across Jharkhand has put patients in a spot and the lives of many are on line as doctors are not able to carry on with treatment due to lack of blood. In the last 72 hours, two patients have died at the Patliputra Medical College Hospital (PMCH) in Dhanbad and surgeries of over a dozen critical cases in different wards are on hold due to the blood crisis.

The crisis in blood banks has been attributed to several factors by authorities of hospitals such as PMCH, RIMS and MGMMCH. Many have cited the long duration of the recently concluded Lok Sabha elections, which meddled with the regular stocking up of blood at the blood banks.

PMCH authorities on Thursday held an emergency meeting and sent an SOS alert to donor clubs across the district for bailing out the institution immediately, as several critical patients continued to suffer.

On Thursday, relatives of three bullet-injury patients, Manoj, Nageswar and Sanjay, had to look for blood donors from their homes district of Giridih, so that the trio could be operated upon at PMCH. All three were admitted to PMCH in a critical condition on Wednesday night. Since the PMCH blood bank was nearly empty, doctors had to call for donors from Giridih.

Earlier on Tuesday, two gynaecology department patients Jyoti Kumari (20) and Shahjadi Khatoon ( 35) died allegedly due to lack of blood. However Dr AK Singh, an official at the PMCH blood bank said that both were severely complicated cases by the time they arrived from nursing homes. Under Janani Shishu Siraksha Yojana, both patients were entitled to get free blood from hospital. “The hospital had provided blood to them in time,” Dr AK Singh said.

PMCH Dhanbad requires 50 units of blood per day to cater to the requirement of patients. But on Thursday, the hospital’s blood bank was left with merely seven units of blood. “Of course there is an unprecedented crisis of blood as incoming flow is almost choked. However, we do not let the patients of hospital to suffer by linking them with donors”, said Dr AK Singh of PMCH.

Patients at hospitals Rajendra Institute of Medical Science (RIMS) in Ranchi and Mahatma Gandhi Memorial Medical College Hospital (MGMMCH) in Jamshedpur are suffering from a similar crisis. Dr KK Singh, blood bank in-charge of RIMS Ranchi on Thursday said the crisis had aggravated badly but now the situation has improved. RIMS requires an average of 82 units of blood per day. On Thursday, the blood bank at RIMS had a stock of 200 units.

MGMMCH had 150 units of blood stocked on Thursday. The hospital requires 20 to 25 units of blood per day to cater to the requirement of patients. “We were facing a major crisis of blood for the past few days but now the stock has improved “, said Dr VVK Chaudhary, blood bank in-charge of MGMMCH Jamshedpur.