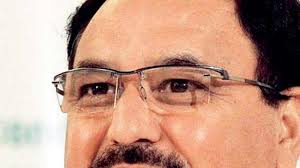 New Delhi: After its massive victory in the Lok Sabha elections, the BJP is eyeing to repeat the success in the assembly polls to be held later this year in three states.

It has started preparation for the elections in Jharkhand, Maharashtra and Haryana. BJP working president JP Nadda has already started visiting the states to take stock of the preparation and further strategy of the party.

Nadda visited Jharkhand on July 13-14, and held a meeting of the core group of the state BJP discussing the party’s preparation and candidates for the upcoming assembly elections.

He is scheduled to visit Maharashtra on July 20-21. Other than meeting party leaders, Nadda would also visit BJP workers at a particular booth to motivate them before the elections. The central leadership has nominated a new president for Maharashtra, Chandrakant Patil, on Tuesday.

Usually a new state president forms his own team. However, considering the assembly elections in less than six months, sources told ET that there would be no further change in the state committee.

While the BJP is preparing for elections, NDA partner Shiv Sena too has started campaigns projecting Aditya Thackrey as the next chief minister.

But Pandey said the CM would be of the BJP and that “there is no second though about that”. The party has assigned private agencies to conduct four state-wise surveys to assess the mood of the people and select candidates.

Nadda plans to also visit Haryana, but the dates have not been finalised. In the meantime, chief minister Manohar Lal would embark on a state-wide yatra beginning August 15. “We are focusing on the yatra of the chief minister,” Haryana BJP president Subhash Barala told ET.

“Apart from that work has begun to connect with party workers at the booth level and all the party MLAs are working on the tasks assigned to them.”