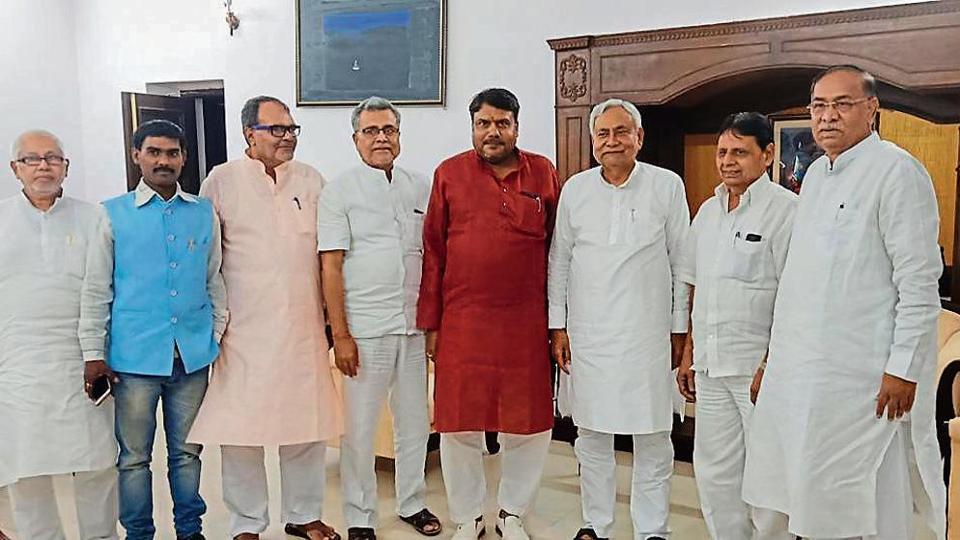 Several political leaders from the neighbouring state of Jharkhand, including one from BJP, joined JD(U) on Sunday, following the party’s decision to go solo in the upcoming assembly elections in four states.

Those inducted into the JD (U) fold by national president and Bihar chief minister Nitish Kumar were Prem Kataruka, former state secretary-cum-spokesperson of BJP, Manoj Yadav of JVM (P) and Arun Mandal and Prabhat Kumar Prabhakar of JMM.

Till now, as an unspoken rule, Bihar allies JD (U) and BJP have exercised restraint in allowing leaders from joining each other’s parties.

The notable crossover of Sanjay Jha from BJP into JD (U) camp in the state was an exception. Jha, who was elevated to the post of national general secretary, is now a minister.

Sunday’s development, viewed in the context of JD (U) turning down the ‘single berth’ offer in the union cabinet, is indicative that the party is not shy of triggering a political realignment in states ruled by its saffron ally. Jharkhand is one of the two BJP ruled states, other than Haryana, that goes to polls along with Delhi and Jammu and Kashmir later this year.

Arun Kumar Singh, in-charge of JD (U) affairs in Jharkhand, said that the joining of leaders will strengthen the party and help in providing a leg-up to its electoral prospects in the state, where voters are looking for an alternative.

That the Jharkhand state unit had already started its preparations on all the 81 assembly seats was evident from the claims of JD (U) state president Salkhan Murmu, who was pitching for Nitish-model of ‘Sushashan’ in his home state which, he believed, will usher development and also remove the friction between adivasi, moolvasi and others, so that people live in harmony.

Their optimism for a ‘good showing’ also stems from the rout faced by opposition parties—JMM, JVM (P), RJD and Congress—during the 2019 Lok Sabha polls. “The JD (U) is in a position to provide a credible alternative to the tribals, minorities and others, particularly after the dismal electoral performance of the JMM-Congress combine,” he said.

Backing JD-U’s more than satisfactory poll performance in Arunachal Pradesh and the strong re-iteration that it was “not part of NDA outside Bihar,” a team of Prashant Kishor’s organisation has already landed in Ranchi to conduct an independent survey to assess the party’s electoral prospects in as many as 35 assembly seats in the first phase.

A BJP leader, not willing to be named, said that such things, ahead of elections, is a common phenomena and ‘disgruntled’ elementshave little or noimpact on final outcomeas voters remain wary and recent pollshave shown that theyreject ‘turncoats’ more often than not.