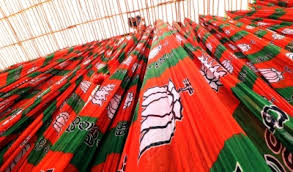 Ranchi, July 29 (IANS) Speculations are rife that Jharkhand polls, due early 2020, may take place along with Haryana and Maharashtra by the end of the year. The ruling BJP has not officially said anything but has begun its preparations, ensuring benefits of schemes reach people and launching a membership drive.

The tenure of Haryana and Maharashtra assemblies are ending on November 2 and 11, respectively and that of Jharkhand on January 5, 2020. With Prime Minister Narendra Modi and BJP favouring simultaneous Lok Sabha and Assembly polls, the party may set an example by holding Assembly polls together.

The party, however, says that no decision has been taken on holding Assembly polls, along with the two other states. “There is no information of advancing the Assembly poll in the state,” BJP leader Ravi Bhatt told IANS.

Asked about the timing of polls, state BJP spokesman Shivapujan Pathak told IANS that the “party has started poll preparations. It is up to the party’s central leaders to decide whether polls will be held on schedule time or advanced”.

“Our membership drive is going at large scale…. We have set target of 25 lakh new members in the state,” he added.

Jharkhand, which has already distributed free gas cylinders to 29 lakh families, has also announced to refill the cylinder at free of cost.

The state is focusing to cover all its people under the Ayushman Bharat and other social schemes.

The Chief Minister has directed the officials to complete major state and centre sponsored schemes by August 31 and September 30, respectively.

Government sources also said that Prime Minister Narendra Modi is slated to make two to three visits to the state in August and September to launch agriculture-related schemes and inaugurate the multi-modal terminal on the Ganga in Sahebganj district.

On the International Day of Yoga, Modi had chosen Ranchi to attend the programme, which was attended by more than 35,000 people.

The BJP is enthused by the Lok Sabha poll outcome, where it won 12 of the state’s 14 Lok Sabha seats, defeating the grand alliance of the Congress, Jharkhand Mukti Morcha, the Jharkhand Vikas Morcha-Prajatantrik and the Rashtriya Janata Dal. While the Congress and the JMM managed to win one seat each, JMM President and former Chief Minister Shibu Soren lost his traditional Dumka seat.

Meanwhile, the membership drive is carried out on an intensive level, especially among the rural areas. BJP Working President J.P. Nadda had also recently visited the state to participate in membership drive campaign and discuss poll preparations with local leaders.

BJP national Vice President Shivraj Singh Chouhan, who is in charge of the membership campaign in Jharkhand, has also visited the state twice.

Even, the opposition parties have started their poll preparations. Not deterred by the Lok Sabha defeat, the grand alliance is again gearing to fight the Assembly polls together.

“We are ready to face the Assembly poll. Let BJP manipulate the poll dates. The assembly poll will be different from Lok Sabha. In the 2014 Assembly polls, despite the ‘Modi magic’ and the divided opposition, the BJP did not get a majority on its own,” JMM General Secretary Supriyo Bhattacharya told IANS.

The BJP had won 37 seats in the 81-member Assembly and came to power with the help of ally, the All Jharkhand Students Union.