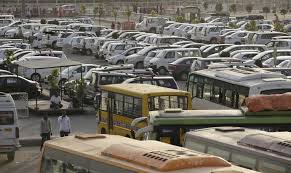 The Bihar government said it plans to convert all commercial vehicles running on fossil fuel to be powered by compressed natural gas (CNG), starting with Patna.

The number of vehicles registered in Bihar jumped 6.5 times in 11 years to 950,120 (February 2018), according to the state transport department. Pollution hasn’t been far behind.

The state capital was ranked the seventh-most polluted city in the world, with a PM (particulate matter) 2.5 count of 119.7 mg, according to the 2018 World Air Quality Report prepared by IQAir AirVisual and non-profit Greenpeace.

The Bihar State Pollution Control Board blamed this on vehicular emission, domestic fuel burning, burning of waste in the open, construction, industrial emissions and road dust.

Owners of all commercial vehicles in Patna have been advised to switch over to CNG to keep air pollution in check, transport department authorities said. “We are encouraging vehicle owners to opt for CNG; not only is it cheaper but also environment friendly,” state Transport Secretary Sanjay Agarwal told Down to Earth on September 5, 2019.

He said the current focus was on Patna and cars with petrol engines, even as the department was firming up a policy. Diesel-run vehicles will be taken up subsequently. Eight companies have been authorised to fit old vehicles with CNG kits, depending on models and variants, he added.

An official report pegged the number of commercial vehicles retrofitted with CNG kits at 150 so far.

The move hasn’t gone down smoothly with owners of commercial vehicles though. Describing the move as a punishment, Ranjeet Kumar, secretary of the Patna chapter of All India Road Transport and Workers Federation, said: “This will destroy our business and leave our families to starve.”

Auto drivers, who make an average Rs400-500 a day, will have to shell out about Rs 35,000 for a CNG kit. “How can they afford that without any government subsidy?” Kumar asked and warned of protests in case the government didn’t look into demands.

Agarwal denied that the government was pressuring vehicle owners. State Transport Minister Santosh Kuamr Nirala, however, said on September 4 that though there was no compulsion and vehicle owners can attach kits voluntarily, “after certain period, conversion of all vehicles to CNG will be made mandatory.”

The lack of CNG filling stations — Patna has only two at the moment — is also a worry. The government has announced that three more will be added by mid-October.