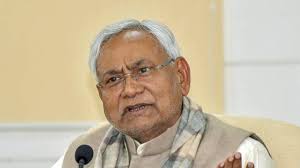 Bihar Chief Minister Nitish Kumar on July 12 told the assembly that his government felt hamstrung when it came to hiking the amount paid to beneficiaries of welfare schemes, a reason why he has been pressing for the special category status.

Mr. Kumar also insisted that the State’s per capita income was “significantly lower” than the national average.

“You talk about Haryana and Tamil Nadu. While comparing the amount paid (to beneficiaries of social welfare schemes) there, please also look at their per capita income vis–vis ours,” he said.

“As a matter of fact, Bihar’s per capita income stands at less than Rs 40,000, which is significantly lower than the national average. This is the primary reason why we seek special status,” Mr. Kumar added, while responding to a calling attention motion introduced by a host of opposition leaders, including veteran Rashtriya Janata Dal (RJD) MLA Abdul Bari Siddiqui.

The motion had sought to draw the government’s attention towards the fact that the amount paid under welfare schemes in Bihar was far less than that doled out by the states of Tamil Nadu, Telangana and Andhra Pradesh.

For a pension scheme, the amount paid to beneficiaries in the state stood at ₹400 per month, while in Tamil Nadu and Telangana it was ₹1000, in Haryana it was ₹1800 and in Andhra Pradesh ₹2000, it said.

Demand for special status for Bihar arose with the creation of Jharkhand in 2000, which deprived the state of its mineral-rich, relatively more industrialized and urbanized southern districts.

It grew stronger in 2005 with ascendance to power of Mr. Kumar, who has often made the “special status’ issue a poll plank. After the 14th Finance Commission did away with the provision, the Chief Minister has, on many occasions, urged the Centre to make necessary amendments so that Bihar could get its due.

“You (Siddiqui) have served as the state finance minister. I wish you had taken our financial situation into account before raising your question. You are comparing Bihar with states where the per capita income is higher than the national average,” Mr. Kumar said, turning towards the RJD leader.

“Moreover, please do keep in mind that Bihar is the first state in the country to have introduced its own universal pension scheme – Mukhyamantri Vriddhajan Pension Yojana,” he added.

Unlike other programmes, the pension scheme does not exclude those above the poverty line, he asserted.

“All men and women, not drawing any other pension, shall be eligible to receive the benefit. This would put an annual burden of Rs 1800 crore and even though we need funds for development works, we are committed to implementing the scheme,” Mr. Kumar said.

Talking to reporters outside the assembly, Mr. Siddiqui, however, appeared dissatisfied with the CM’s reply.

“I am glad that the chief minister took seriously the issue raised by me. But his emphasis on the state’s financial situation leaves the basic question raised in our motion unanswered. The state’s budget this year stood at about Rs 2.05 lakh crore. This is a significant rise in comparison with what the size of budget was a few years ago,” he claimed.

“There has not been a commensurate rise in the welfare benefits being extended to the vulnerable sections of the society. So, we had sought to know whether these matters were not high on the government’s list of priorities,” Mr. Siddiqui added.