Buxar: Makar Sankranti will start the Mission Parivar Vikas Abhiyan in the state from 14 January. The two-phase campaign will run till 31 January. Under this, the couple will be observed in the first phase from 14 to 20 January where couple contact week. At the same time, in the second phase, Family Planning Service Week will be organized from 21 to 31 January. In this regard, Executive Director of the State Health Committee, Manoj Kumar has instructed the civil surgeon including all the District Magistrates.

Under this, the couple, who are celebrated in the first phase, get married at the right age to bring awareness to the public during Sampark Pakhwara, first child after at least 2 years after marriage, at least 3 years gap between two children and childbirth. After or after abortion, emphasis will be given on permanent and temporary means of family planning. At the same time, a sterilization camp will be organized in the first referral units during Family Planning Service Week. Speed ​​up service delivery as per demand

It has been told through the letter that about 60 percent of the couples after institutional delivery and about 90 percent after safe abortion, there is a demand for family planning. Keeping this in mind, special emphasis will be given during the campaign on female sterilization and copper-T installation after delivery. For this, women wishing for childbirth and abortion through family welfare consultants, ANM, staff nurses in the delivery room will be facilitated and will be facilitated. What is the purpose of mission family development

The letter issued by the Executive Director stated that during the campaign, annual awards ceremony will be organized in the year 2019 under the family planning program from January to December. Health institutions, service providers and originators will be rewarded in this. CS said that the campaign is to be executed in four phases, the first two phases of which have already been completed between 11 to 31 July and 24 November to 6 December. 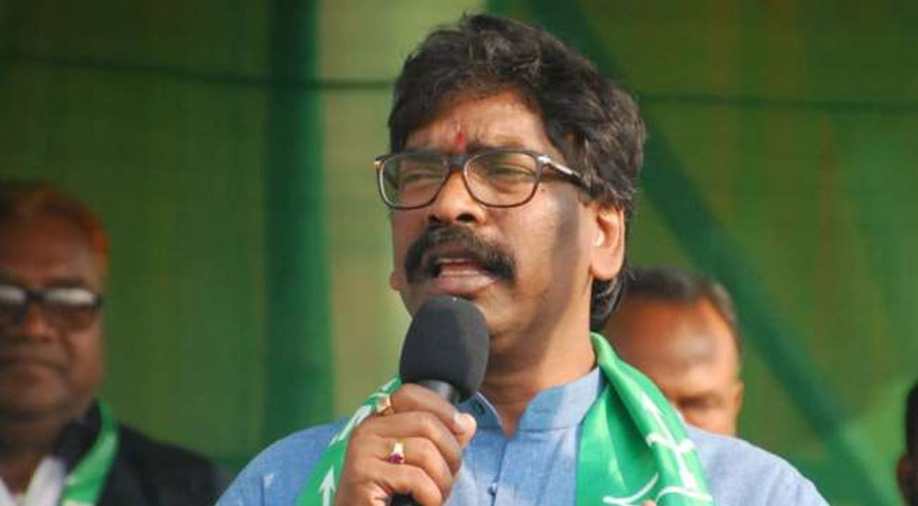 When I travelled across Jharkhand- my home state in 2017 – public opinion was still in the BJP’s favour. Saffron flags could be seen outside houses in a tribal village on the outskirts of Ranchi. People said that BJP volunteers met them and that they are hopeful that the government will bring development. The changes that central schemes like Ujjwala Yojana brought were visible as many houses got gas connections. Many of them built toilets from the funds allotted by the government.

Yet, the BJP’s defeat was in the offing months ahead of the state elections. Polling in Jharkhand was underway when the Citizenship Amendment Act was passed by Parliament but national politics had little impact on the state elections which was fought on regional issues.

Raghubar Das who not only became the state’s first non-tribal chief minister, but also the first to complete a full five-year term was an unknown figure when he took over the post.

His compatriot and former CM Arjun Munda remained much popular. Munda was also a formidable tribal leader in the state.

But Das’ rift with Munda was an open secret and this meant that the latter was mostly not involved in campaigning.

It didn’t help much for an already unpopular CM to sideline well-known veterans and give tickets to Congress turncoats. Anti-corruption crusader Saryu Rai who spoke against tainted ministers in Das’ cabinet was denied a ticket.

Rai later defeated Das as an independent from Jamshedpur East.

The BJP hardly won any seat in the tribal belt while Hemant Soren’s Jharkhand Mukti Morcha (JMM) swept the region. Tribal discontent against the government was growing. One of the major concerns was proposed amendments to two land laws- the Chotanagpur Tenancy and the Santhal Parganas Act.

The amendments which did not materialise sought to lift restrictions on the sale of tribals’ land to industries. The opposition dubbed the government as ‘anti-tribal’ and a lack of communication with the people made the situation worse for the BJP.

The lack of a prominent tribal face was made worse by the saffron party’s fallout with its ally All Jharkhand Student’s Union (AJSU) which was popular among the tribals as well as the OBCs.

The BJP eventually fought the elections alone in a state where no party has been able to secure a majority on its own.

Policy failures too served a blow to the BJP government. The global investors’ summit ‘Momentum Jharkhand’ gained a lot of traction but failed on the ground. The event failed to create jobs and attract investments as the state lacked enough infrastructure to support the establishment of new industries. And once again, the government failed to assuage tribal anger on the issue of land. This as new industrial projects meant acquisition of land in tribal areas. 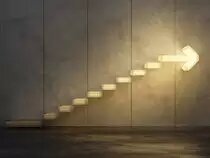 Shares of Va Tech Wabag rallied over 8 per cent in Thursday’s morning trade after the water treatment player informed the bourses that it secured an order worth Rs 1,187 crore under the Namami Gange Project.

The company on Tuesday said it inked a new project with the Government of Bihar to set up a sustainable wastewater infrastructure programme.

VA Tech has signed the agreement under the National Mission for Clean Ganga to design, build and operate sewage treatment plant of 150 MLD in Digha and Kankarbagh zones of Patna.

Upon completion, the project would ensure a cleaner and healthier ecosystem for over 50 per cent of the population in Patna, the city-based company said in a statement.

The company would be responsible for the sewerage infrastructure in four out of the six zones of Patna (Pahari, Karmalichak, Digha and Kankarbagh).

Commenting on the order win, Varadarajan S, Director and Chief Growth Officer, said “With this repeat order in Bihar, Wabag will now be responsible for sewerage infrastructure in four out of the six zones of Patna, thus testifying the trust reposed by NMCG and BUIDCO on Wabag. This project is an important step in realising the vision of ensuring 100 per cent sewage collection and treatment in Patna. Wabag is already executing projects for BUIDCO in Pahari and Karmalichak. All these projects, on completion, will ensure a cleaner and healthier ecosystem for over 50 per cent of the population of Patna.” 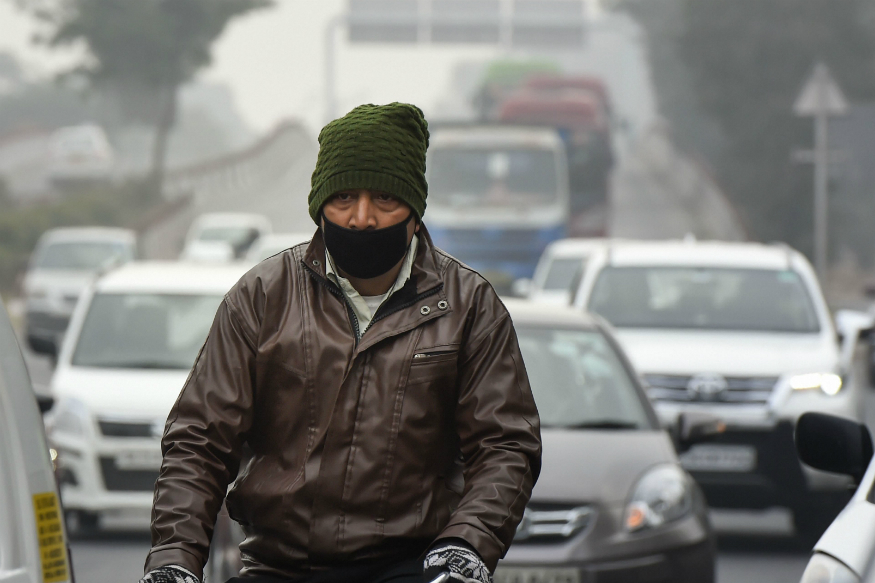 The weather department said the temperatures have increased by 3-4 degree Celsius over most parts of Uttar Pradesh and East Rajasthan and at isolated places in Haryana, Delhi, Punjab, west Madhya Pradesh during the past 24 hours.

The national capital witnessed a sunny New Year’s Day on Wednesday and the maximum temperature rose to 20.5 degrees Celsius, giving people some respite from the bone-chilling cold that persisted for over a fortnight. The weatherman has predicted light rain over Delhi on Thursday.

The city was wrapped in a cover of moderate fog with 29 trains being delayed by two to nine hours due to reduced visibility, officials said.

December 2019 recorded 18 consecutive ‘cold days’ or an 18-day ‘cold spell’, the maximum after 17 cold days in December 1997. The maximum temperature in Delhi took a big tumble on Monday to settle at 9.4 degrees Celsius, making it the coldest December day since 1901. 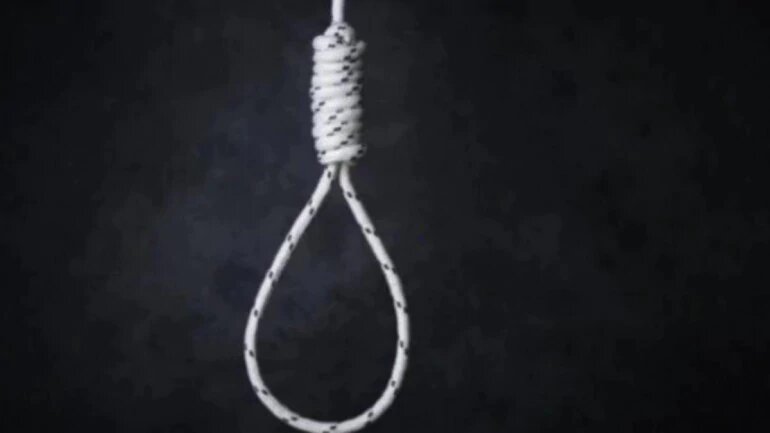 A woman shocked by the death of her husband, who was in Indian Army, committed suicide by jumping into the well on the outskirts of Ranchi on Thursday morning, the police said.

According to the police, Maneeta Oraon, wife of Bajrang Bhagat, 29, committed suicide by jumping into the well in her village Channo, which is 40 km from Ranchi.

Bajrang Bhagat died on December 30 at Jammu, where he was posted. His dead body was brought to the village in the evening on January 1.

The last cremation was scheduled on Thursday. She was shocked with the death of her husband.

The woman’s body has been sent for post-mortem.

Maneeta was married with Bajrang two years ago. They had no issue.

According to the villagers, the sister-in-law of Maneeta used to taunt her for having no children. After death of her husband, she found herself helpless and decided to commit suicide , the police said.

Bajrang had joined Indian Army in 2012. He was transferred to Jammu from Maharashtra three months ago. He died after falling from the bed. Police have started to probe the reason of his death. 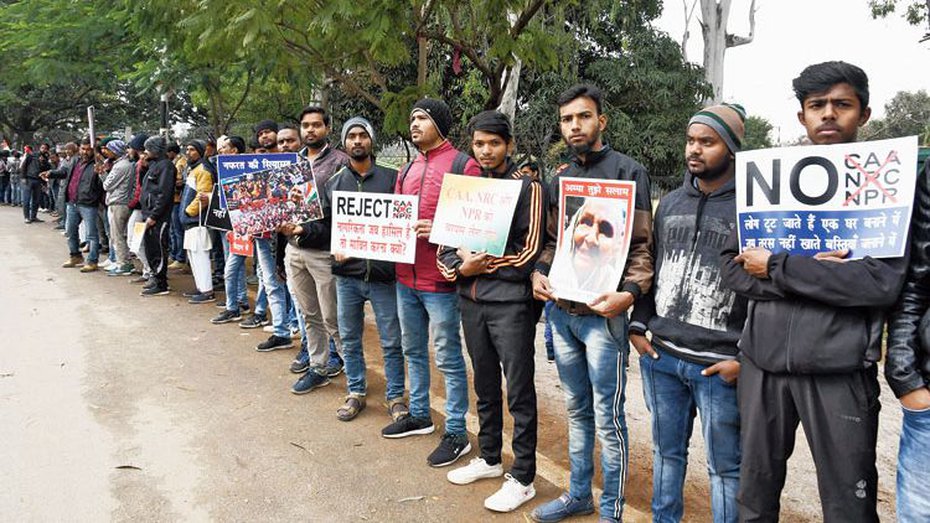 A large number of people comprising activists, students, women including many in burqa, and members of various minority, tribal and political parties and civil society outfits took part in the Sankalp Sabha as the protest was named, hosted by the Sajha Manch, an united forum.

They started by reading out the Preamble of the Constitution under the statue of Mahatma Gandhi.

Many speakers, irrespective of religious or political affiliation, described the CAA, NRC and NPR as “anti-constititional and anti-people”.

“The CAA violates Articles 14, 15 and 21 of the Constitution,” pointed out well-known activist Balram, adding that jal-jangal-jameen and the culture of the people of Jharkhand speak volumes about nationality. “Nothing else is required to prove it.”

“The BJP and RSS want to break the unity and social fabric of the country and spread hatred among communities,” alleged Ibrar Ahmad, the chief of the local Anjuman Islamia, a minority social outfit.

“The people of Jharkhand, in the Assembly recent polls, have rejected the BJP for its anti-people agenda,” said tribal activist Dayamani Barla, describing the CAA, NRC and NRP as “anti-people”.

Those who attended it included members of the United Milli Forum, the Anjuman Islamia, the Majlis-e-Ulema (Jharkhand), Muslim Youth Forum, political parties such as the Congress, the RJD, JVM, the Aam Admi Party and the CPI, and the organisations such as the National Alliance for People’s Movement, the All-India Students Federation, the Ulgunan Sena, the Janvadi Lekhak Sangh and the Indian People’s Theatre Association.

Hemant, it is now known, opposed NRC and CAA and also expressed it through a two-part tweet on December 29. “I don’t think the NRC is feasible or implementable. The entire country is up in arms against CAA…”