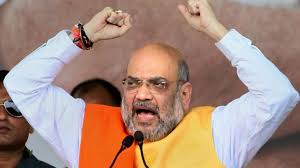 Union home minister Amit Shah on Wednesday promised that the Bharatiya Janata Party governments at the Centre and in Jharkhand would work together to make the state the No. 1 state in the country. Shah said that since Narendra Modi came to power at the Centre, Naxalism has declined in the state and various welfare schemes have been successfully implemented in the state.

Shah was addressing a rally in Jharkhand’s Jamtara district. Jharkhand, along with Maharashtra and Haryana, is expected to go to the polls later this year. Shah was speaking after launching the BJP’s ‘Johar Jan Ashirwad Yatra’.

The yatra will crisscross Jharkhand’s 81 assembly constituencies ahead of the polls in the state.

Speaking at the rally, Amit Shah also Prime Minister Narendra Modi showed Pakistan its place by abrogating Article 370 and 35A and established that Jammu and Kashmir is an integral part of India.

Shah said Congress leader Rahul Gandhi should tell people of Maharashtra, Jharkhand and Haryana, when he goes to those election-bound states, whether he was with the decision to abrogate Article 370.

“Removing Article 370, Modi ji showed Pakistan its place, and established that Kashmir is an integral part of India,” Shah said.

“Our stand has been to remove Article 370 ever since it had been there,” Shah said and asked “why the Congress felt a ‘stomach ache’ following its abrogation?”

Launching a scathing attack on the Congress, Amit Shah said the party had also opposed and sought evidence after the surgical strikes.

“They (Congress) should tell the people which direction they want to go,” he added.

Shah said even while being in the opposition, his party leaders had supported the government on important issues.

‘CONGRESS DID NOT HEED JHARKHAND’S WISHES’

Amit Shah went on to question what the Congress did for the state and slammed the party for not heeding the decades-old demand to create a separate state. (Jharkhand was a part of Bihar until 2000).

Shah said that the Congress had not accepted Jharkhand people’s decades-old wishes for a separate state and that it was former prime minister Atal Bihari Vajpayee who fulfilled the dreams.

“There is Modi government above [at the Centre] and Raghubar Das government below [in the state]. The double engine governments have changed Jharkhand, and the evidence is that the people of Jharkhand gave 12 of the 14 Lok Sabha seats to Modi government in the Lok Sabha elections,” Shah said.

“Naxalism was there, but now Jharkhand is headed towards [becoming] almost naxal-free and moving forward with developmental initiatives,” Shah said. “The double engine governments will make Jharkhand the number one state in the country.”