New Delhi: Seven people were murdered and beheaded in Jharkhand’s West Singhbhum district in January. A Special Investigations Team (SIT) had linked the killings to opposition to the Pathalgadi movement – which seeks to preserve and safeguard tribal traditions. It was argued that the people were murdered because of their opposition to the Pathalgadi movement by a pro-Pathalgadi faction in the village.

However, a fact-finding team comprising of activists, writers and journalists has now suggested that there may have been a different reason. The team has found that those killed had not followed the diktats of the Sati pati cult – which nudges people to boycott government schemes and surrender government issues documents. The cult originated in Gujarat and has been active in Jharkhand for the past year.

The fact-finding team, which was put together collectively by Jharkhand Janadhikar Mahasabha and National Alliance of People’s Movement (NAPM), found in its visits and conversations, that about half of the village was following the sati pati cult, while the rest were not. Those who were killed belonged to the section of the village which did not surrender its government-issued documents as the sati pati cult had suggested.

James Budh, one of those killed, had been vocal about his opposition to the cult and had objected to giving up the benefits of government schemes. On January 16, James and some armed members of the People’s Liberation Front of India (PLFI) – a Maoist splinter group – had attacked the houses of some of the followers of the sati pati cult.

Then, on January 19, members of the sati pati cult invited James and his accomplices to a meeting. According to the fact-finding team, this is what transpired at the meeting, “from the testimonies of sati pati supporters and family members of the victims, it emerged that the seven people were beaten to death in the meeting and then beheaded.”

The fact-finding team conceded that ‘several questions remain unanswered’ about the killings. But, it is certain that two factions in the village were pro-sati pati cult and anti-sati pati cult contrary to the narrative by the administration which has argued that the killings were the result of a contestation between supporters and detractors of the Pathalgadi movement. 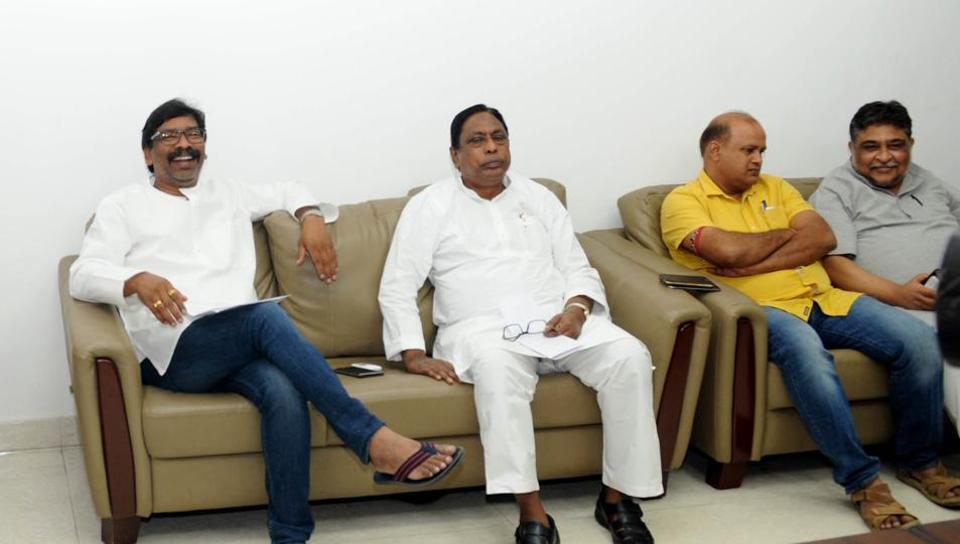 The Opposition parties on Wednesday outlined the contours of pre-poll alliance at the residence of JMM working president Hemant Soren.

The leaders stressed on charting out a mutually agreeable formula ahead of the assembly polls.

It was agreed that the parties will give candidates from the seats they had won respectively in 2014 and there was no qualm on it.

The parties also stressed on earmarking the seats in the name of the respective parties wherefrom they finished second in the last assembly election.

Besides, there was confusion over the rights of the JVM (P) to contest the six assembly seats it had owned in 2014 but the party legislators defected to the BJP after winning.

The above two contentions were kept open for further discussions and debate while the allies have been asked to submit their wish list within seven days in writing. The grand alliance of the opposition is cautious after being humiliated by the BJP.

The meeting was attended by the representatives of Congress, JVM (P), RJD, Marxist Coordination Committee (MCC) and Forward Bloc.

However, the main Left parties – the CPI, CPI (M) and CPI (ML) Liberation did not attend. The decision was taken on Tuesday.

The Left decided to identify the seats the parties want to contest and to negotiate with the grand alliance parties thereafter. Confirming this, CPI state secretary Bhubaneswar Prasad Mehta said the Left parties will meet on July 16 to finalise their list.

Clarifying further, CPI national secretary Atul Anjan said the Left is open for negotiations. We will support any forces that are keen to defeat the BJP, he said. He said that the most Opposition parties do not have ideas on how the BJP is disintegrating the Opposition engineering defection.

JMM working president Hemant Soren, after the meeting, said that the efforts are on to bring all Opposition parties under one umbrella to show BJP the exit door. He said the parties have been directed to identify the seats they are confident of winning and submit it in writing in one week.

On claims of the parties from the sitting seats they had owned in 2014, Hemant said it is a natural claim. For the rest of the seats, decisions would be taken later regarding who will contest where, he said.

On the vexed issue of seats owned by six JVM (P) legislators, who joined the BJP later, he said, “We are serious on that too and working on mutually agreeable solution before staking claims on those seats.”