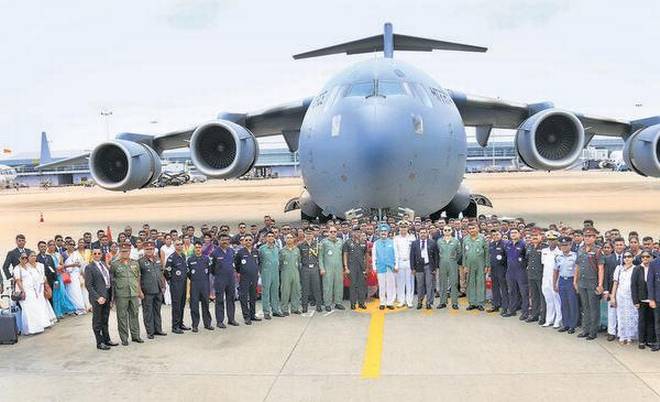 The High Commission of India organised the second edition of a special pilgrimage trip to Bodh Gaya from 15 – 18 June 2019 for 160 personnel of Sri Lanka armed forces and their families.

The special pilgrimage was started last year based on discussions held between the two countries towards increasing interaction and bonhomie between armed forces personnel of both countries, a statement from the Indian High Commission said.

This year’s trip has built on and expanded over the last one by not only having an increase in duration from two to four days but also inclusion of a reciprocal visit by 160 Indian Armed Forces personnel and their families to Sri Lanka.

During the trip, the Sri Lanka armed forces personnel and their families would visit the sacred Mahabodhi Temple, 80 feet statue of Buddha, Rajgir and Nalanda museum.

The Indian contingent which has arrived on a special request of Commander of Sri Lanka Army would visit important places in Sri Lanka. This includes a visit to Kandy where they would pay their respects at the Temple of Tooth Relic and to Galle. This is the first time when such large delegation of Indian armed forces with their families has arrived in Sri Lanka to undertake a visit.

An Indian Air Force C-17 Globemaster aircraft was specially deployed for transportation of the Sri Lankan and Indian contingents.

In addition to cultural and historical immersion, large scale interaction between armed forces personnel and their families would be undertaken both in India and Sri Lanka.

This would provide an ideal platform to develop personal and everlasting bonds of friendship between the armed forces of the two countries which are already sharing a very deep and robust professional relationship.

Shri Taranjit Singh Sandhu, the High Commissioner of India to Sri Lanka and Lt General Mahesh Senananyake, Commander of Sri Lanka Army were at the airport to receive the Indian delegation visiting Sri Lanka and see off the Sri Lankan delegation for their visit to India.