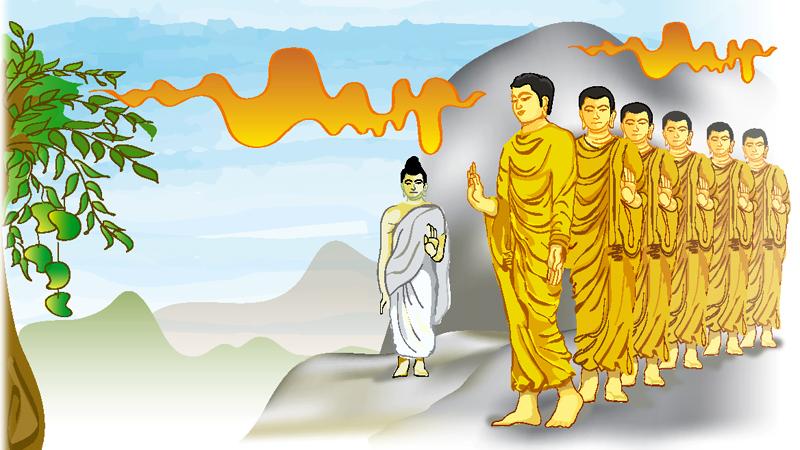 ‘Spiritual pageant’ is the most eloquently befitting definition that can effectively capture the inner essence of the Poson presence of Arahant Mahinda at the Mango Grove that has now acquired a sacred aura.

The whole island was in the midst of a royally-decreed National Festival. The King had set aside this day for a ‘Deer Hunt’ in the Mango Grove.

By this time Arahant Mahinda had already arrived at that site by air with a saintly retinue of six, and had alighted on the Rock at the Mango Grove.

The King, with his bow and arrow ready, was rushing past the Rock earnestly chasing the deer he had targeted. Suddenly he stood still, when someone accosted him by his first name ‘Tissa’. His fury knew no bounds, as there was no being who had the audacity to call him by his first name. Looking around, he saw a solitary figure in saffron robes, on the top of the Rock. (Arahant Mahinda had concealed the others, by his miraculous powers).

In his uncontrollable resentment at the daring of this ‘odd looking’ character, the King became abusive.

Pujavaliya the reputed Sinhala classic, states that Arahant Mahinda listened to all those words of insult with saintly patience and responded with this statement:

“Oh great King, we are monks, disciples of the King of Truth. We have come from Jambudipa (India) in our compassion for you.”

Pujavaliya comments, that, Arahant Mahinda listened to the insults of the King, “with the indulgence of a father, responding to the childish prattle of an infant,” and calmed the troubled mind of the King, revealing the reality.

Immediately, there is a dramatic change in the King. He espouses the Timeless Dispensation of the Supremely Enlightened Buddha along with all his people.

To my mind, this could very well be the swiftest conversion of a whole nation, in recorded history.

This miraculous transformation, that took place about 2,265 years ago, has endowed upon us an unresolved enigma.

Emperor Dharmasoka sent spiritual emissaries to a whole series of countries. The missionaries who took his spiritual message to most countries were primarily elderly monks.

The Great Emperor Asoka sent to our land his son and daughter- Ven. Mahinda and Ven. Sanghamitta. Over and above that the Emperor saw to it that, 18 clans of persons, well-versed in a vast range of crafts and rituals arrived in Sri Lanka to perform tasks associated with the practice of the New Religion.

But, there was a prefatory phase we should focus on. Early in the reign of King Devanampiyatissa, the Emperor had the Sri Lankan Ruler consecrated a second time, during which the Ruler had to take on the Title Devanampiya (Beloved of Gods) as an Imperial Gift from Emperor Asoka.

Under the Emperor’s patronage a sapling of the sacred Bodhi Tree was brought here by the Ven. Sangamitta.

Strangely enough, Arahant Mahinda conducted the earliest I Q, in Sri Lanka’s history when he tested King Devanampiyatissa’s wisdom through a series of queries.

If one is interested in making an in-depth study of the sustained effort Arahant Mahinda made to establish Buddhism on a firm footing in Sri Lanka one must go through the detailed chronology effected by the author of Pujavaliya about the impressive range of activities of Arahant Mahinda in the early and formative days of Buddhism in Sri Lanka.

The Ven. Author of Pujavaliya, sets down in high admiration that Arahant Mahinda presented a multitude of sermons without getting down any reference book from India.

That is only a mere drop in the massive ocean of achievements by Ven. Arahant Mahinda. He converted tens of thousands into monks and nuns; established a Buddhist monastic culture that is still alive even in this 21st century. The temple rituals and lay practices of Sri Lankan Buddhists can be traced back to the ramifications of his initiatives.

The primary ritual of calling the faithful to listen to a sermon was practised on the Rock in the Mango Grove.

In this very first input at the Rock in the Mango Grove, Ven. Arahant Mahinda requests the Novice Monk Sumana to call out to deities to listen to the sermon.

The moderns will be overwhelmed by surprise when they become aware that most of our monastic and lay Buddhist rituals can be traced to this miraculous Poson Encounter at the Mango Grove.

Our Poson Day should be to meditate profoundly on the manner in which Ven. Arahant Mahinda and his saintly retinue, ensured the lasting presence of the Buddha’s sacred Dispensation in this Isle of Righteousness. (Dharmadvipa).