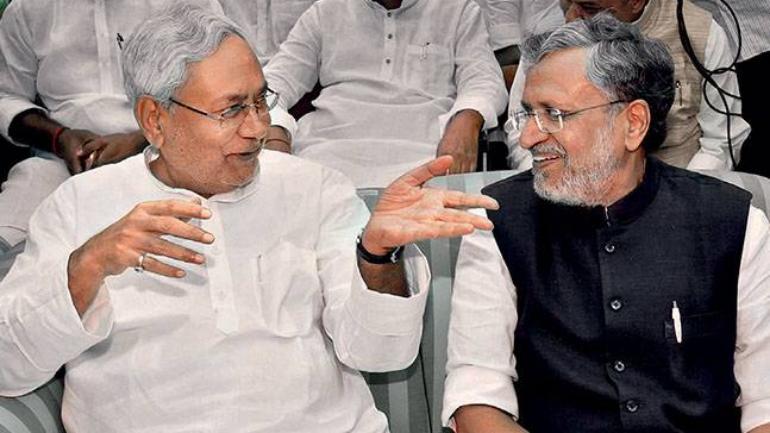 Sushil Modi’s BJP and Nitish Kumar’s Janata Dal-United (JDU) are clearly bound by a common vision and purpose in Bihar, yet also pushed apart by their political teammates and their temperaments.

It’s not for nothing that Giriraj Singh’s tweet has once again brought the irony behind the electoral friendship of Kumar and Sushil Modi, the tallest BJP leader in Bihar and one of the strongest supporters of Nitish-BJP alliance, to the fore. Kumar and Sushil Modi, in their contemporaneous careers, often symbolise the prisoner’s dilemma that circumstances had thrust upon them.

The two have somehow seen through the bitterness and understood that they were better off collaborating than confronting. But there are spoilers galore. Singh was clearly one of them.

Fresh from his promotion to the Union Cabinet in the new Narendra Modi government, the senior BJP leader, for whom Nitish Kumar had campaigned during the Lok Sabha elections to ensure his victory, on Tuesday morning tweeted four pictures from three different iftars, saying: “How beautiful the pictures could have been had falahaar (fruit feast) been organised with similar fervour during Navratri. We fall behind in our own rituals and religion but are ahead in showing off.”

These pictures were from iftar parties organised by the JD-U, Ram Vilas Paswan’s Lok Janshakti Party (LJP) and Opposition alliance member Jitan Ram Manjhi’s Hindustani Awam Morcha (Secular) (HAMS). Since Nitish Kumar was the only leader present in all the four pictures, the man and the target behind Singh’s tweet was not lost on anyone.

Not only this, Singh’s tweet was uploaded on the eve of Eid ul-Fitr and its underlying message seemed to be confronting the inclusive outreach of Prime Minister Modi and the secular fabric of the Nitish Kumar-led NDA government in Bihar.

Though there are suggestions that BJP President Amit Shah has advised Singh against making such comments, the Union minister has not withdrawn his tweet, which was still visible till the time of filing this report.

A section of JD-U leaders, however, refused to accept Giriraj’s tweet as a coincidence. They see a purpose in the tweet, as Singh’s quip has come at a time when relations with the BJP have turned frosty after Nitish Kumar refused to accept a “symbolic representation in the Union Cabinet.”

The BJP had offered a solitary Cabinet berth to Nitish Kumar’s JD-U in the Union Cabinet, describing it as a “symbolic representation.”

The Bihar chief minister, who heads a party of 16 Lok Sabha and six Rajya Sabha MPs, promptly shot down the saffron proposal on the ground that it should have been proportionate and not symbolic.

In what seemed like a return riposte, Nitish expanded his ministry on June 2 by inducting as many as eight JD-U members while offering just one berth to the BJP, which was not accepted by the latter. “Giriraj Singh is not alone to have taken potshots at the NDA alliance in Bihar.

In 2017, when JD-U rejoined NDA, our former National President Sharad Yadav had defied the decision. While JD-U quickly showed the door to our former national president, the BJP has failed to force Giriraj to make amends,” said a senior JD-U leader.

JD-U chief spokesperson Sanjay Singh has described Giriraj Singh’s tweet as a clear manifestation of the fact that BJP has no control over such leaders. “It is time for the BJP to take the comments of Giriraj seriously and take action,” he said.

They say momentous eras are appreciated only in retrospect, but in this case, where Nitish Kumar accepted BJP as an alliance partner, the two have together delivered magic.

A landmark Lok Sabha election victory in 2019 where the NDA won 39 of Bihar’s 40 seats looks both unprecedented and unrepeatable. The combined magic of BJP and JD-U made a spectacular start in 2005 when the two parties together unseated Lalu Prasad who seemed invincible then.

Since then, the two parties have prospered and gone from strength to strength, evolving a relationship that was to be the making of modern Bihar.

When the BJP and JD-U separated in 2013 and fought two elections against each other, the BJP won the 2014 Lok Sabha poll while Nitish Kumar won the 2015 assembly polls. The two once again came together in 2017 to deliver a watershed result in the 2019 Lok Sabha election.

Today, however, with Bihar Assembly polls scheduled in 2020, the two parties, JD-U and BJP, need to unthaw their relationship to fill up the fissures, which have come up after the BJP refused to let Nitish have more than one representation in the Union Cabinet.Giriraj Singh or his tweets can make the process a painful one for NDA in Bihar.