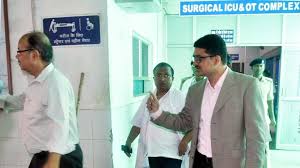 Jharkhand may get 50 more MBBS seats in current academic session as a three-member team of Medical Council of India (MCI) on Wednesday held sudden inspection of Patliputra Medical College Hospital (PMCH), Dhanbad, for verification of compliance report over 100 MBBS seats.

Though the MCI inspectors refused to share details with the media, they looked satisfied after the inspection and verification of the compliance reports sent by PMCH to MCI about faculty strength in college and infrastructure in hospital.

PMCH principal Dr Shailendra Kumar said three-member MCI team made spot inspection of all faculties and hospital wards and verified them with our compliance report. Now on basis of their findings, the MCI board would decide to permit 100 seats in the current session. “ We are hopeful of regaining 100 MBBS seats as maximum deficiencies have been fulfilled”, he said.

MCI had increased 50 seats each (total 100) to PMCH and Mahatma Gandhi Memorial Medical College Hospital (MGMMCH) Jamshedpur in 2013. But due to deficiencies MCI reduced 50 seats of PMCH in 2017 and MGMMCH in 2019.

“In March, the MCI had inspected PMCH and pointed out deficiencies to be fulfilled to get permission for 100 seats. In April, PMCH had sent compliance report. Today Inspectors had come to verify compliance report”, said principal. He said only 20% faculty deficiency is left otherwise posts of senior residents and junior resident and assistant professors have been filled up.

Till date, Jharkhand has 580 MBBS seats, including 100 each of three newly set up, Palamu, Hazaribagh, Dumka, 180 of RIMS Ranchi,50 each of PMCH and MGMMCH.

PMCH superintendent Dr HK Singh said except oxygen pipe line, the hospital has fulfilled all deficiencies pointed out by the MCI.