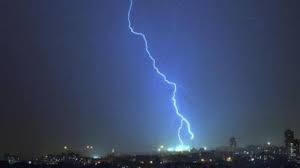 The other two were rushed to a hospital but to no avail. They breathed their last in Sadar Hospital, Garwha on Thursday.

Garwha SDO Pradip Kumar said that it was raining and the youths tried to hide themselves under a tree. The trees are a good conductor of electricity. When the lightning hit it the tree the current was discharged upon the youths hiding under it.

Meanwhile, senior geologist of Ranchi University — Dr Nitish Priyadarshi — expressed his concern over death due to natural disasters time and again in the far flung and rural areas.

Nitish Priyadarshi has cited that acute lack of awareness is the big reason of casualties from nature furies. Villages located at high altitude is common in Jharkhand and people don’t know that it is not at all advisable to go outside in fields and open spaces when there are any chances of thundering or lightning strikes.

“Above all still, the use of conductors are minimal in the rural areas. Massive awareness campaign is required to update the people to stick to the dos and don’ts during thundering and lightning. This is high time disaster management department of Jharkhand government should take a call to preempt casualties,” Nitish Priyadarshi said.