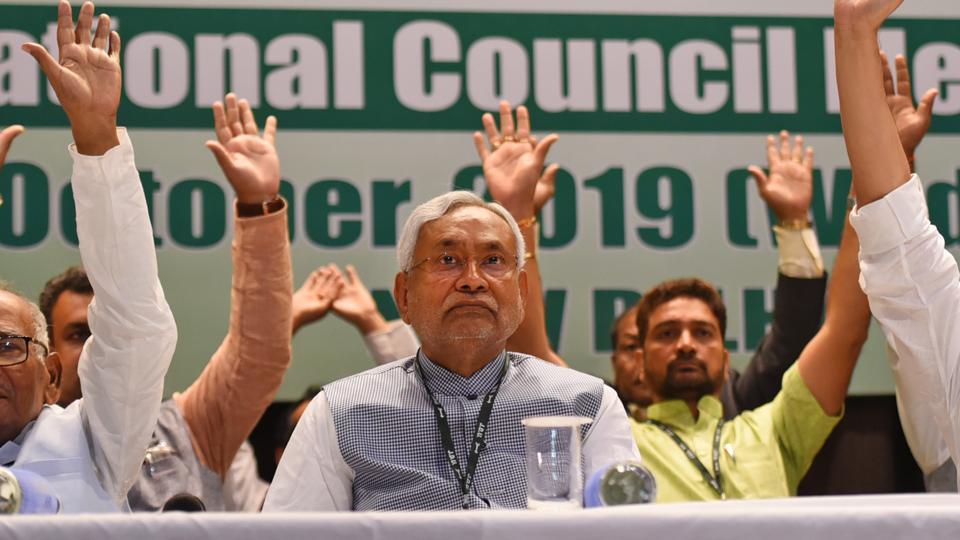 The Janata Dal (United) led by Bihar chief minister Nitish Kumar has set its eyes on the upcoming Jharkhand and Delhi assembly polls which could be critical to its efforts of being declared a national party.

The elections to the 81-member Jharkhand assembly will be held in five phases beginning November 30; Delhi will go to polls early next year.

After assuming charge for the second consecutive term as the party’s national president in Delhi, Kumar, on Wednesday made a strong pitch towards realizing the target at the earliest.

“My priority as the party president is to expand its base in other states including Jharkhand, Delhi and the north-east to get national party status for the JD-U,” he said.

According to the criteria set by the Election Commission of India (ECI), a national party needs to get at least 6% of the votes across a minimum of four states, or 2% of the total seats in the Lok Sabha from at least three states, or it should be recognised as a state party in at least four states.

JD(U)’s ambition to expand its national footprints received a boost after it won 8 out of 60 assembly seats in Arunachal Pradesh , next only to the ruling Bharatiya Janata Party which won 41 seats and secured a majority, in elections in May this year.

However, it performed badly in assembly polls in Chhattisgarh (2018), Rajasthan (2018), Karnataka (2018), and Gujarat (2017). In Nagaland, the party won one seat. In Assam, JD (U) contested four seats in collaboration with AlI India United Democratic Front (AIUDF) led by Badruddin Ajmal, but could not win a single seat.

In Kerala, JD (U) contested seven seats under the Congress-led United Democratic Front (UDF), but failed to open its account.

“The JD (U) has the requisite share from two states, Bihar (70 seats) and Arunachal Pradesh, and we narrowly missed the target in Nagaland,” said the party’s principal general secretary, K C Tyagi.

In Delhi, the party is eyeing Poorvanchalis, the migrant population from Bihar and eastern Uttar Pradesh who dominate certain pockets of the city. In 2015, over a dozen members of the 70-member Delhi assembly were from Purvanchal.

“In Delhi, we might be contesting close to 35 seats where the voters from Purvanchal have a say in deciding the fate of the candidate,” said a senior JD (U) leader who spoke on condition of anonymity.

In Jharkhand, some party leaders say that the JD(U), which is part of the BJP-led National Democratic Alliance, will go solo and contest all the 81 seats in the November-December polls. In 2005-06 ,JD (U) had seven legislators in Jharkhand.

However, the party lost its sheen after the 2009 polls and has failed to win a single seat in any election thereafter.

“Our strategy for Jharkhand and Delhi is clear. We want to contest independently and with full strength. The number of seats to be contested will be decided later,” said Afaque Ahmed Khan, the party’s national general secretary.

DM Diwakar, professor, AN Sinha Institute for Social Studies, Patna, said that vying for national status is the ambition of every party.

“Nitish Kumar’s party wants to send a message that it is expanding its base, thereby projecting him as a national leader. On the other hand, wherever the JD (U) contests, it indirectly helps the BJP as it erodes the votes of the party opposed to the BJP.”