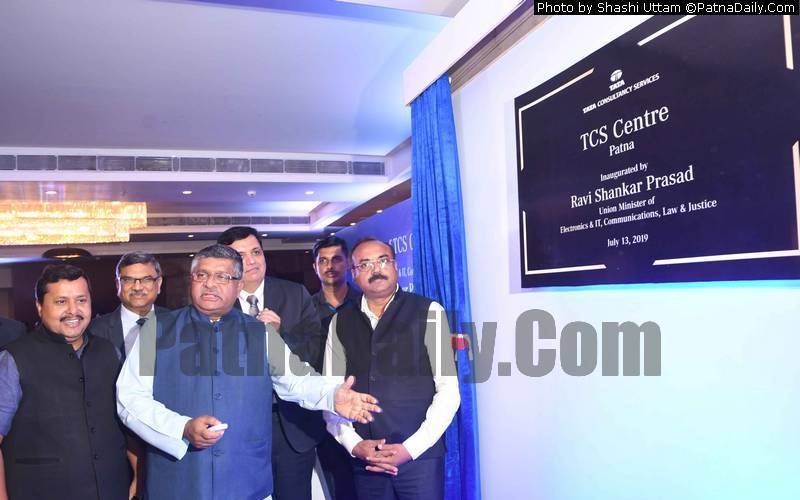 Built at the cost of Rs. 20 crore, the center is expected to hire 400 employees working in software development and business processing side of the information and technology industry, Prasad said.

Urging private industries to invest in Bihar, the Central Information and Technology (IT) and Law Minister said that TCS was India’s largest IT company that employed over 4 lakh people worldwide. Nearly 36% of its workforce is made up of women, he said.

Prasad then went on to the obligatory praise of Narendra Modi saying because of the immense trust the people of Bihar had posed in the Prime Minister, the TCS was an early gift to the state by him.

“This is an early gift from the Prime Minister and more is yet to come. We also plan to turn 5000 villages in Bihar into ‘Digital Village’. Nationwide, more than one lakh villages are part of this ambitious plan. Patna is going to be an ‘IT Hub’ in the coming days,” Prasad said.

Prasad’s vision of Patna being the IT hub of the nation is reminiscent of similar promises made by Chief Minister who has, in his 14 years of rule in Bihar, has pledged to turn Patna, or Bihar, into a ‘Tourism hub’, an ‘IT hub’, a ‘Healthcare Destination’, an ‘Education Mecca’, and an ‘Agricultural powerhouse’, among other ‘hubs’.

Relying on the number of cell phone users in Bihar, the Bharatiya Janata Party (BJP) leader said that out of 130 crore people of Bihar, 123 had Adhaar card and out of 121 crore users of mobile phones, about 70 crores were the owners of smart phones.

“This all means that Bihar is ripe for a ‘digital revolution’ and e-governance. With the presence of TCS, Patna will become the IT hub of eastern India,” he said.

The event was attended by a number of BJP leaders including Sanjeev Chaurasia, Nitin Navin, and TCS Global head Milind Lakkad.