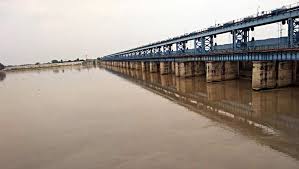 Fresh threat of flooding has come to haunt Bihar again with river Ganga rising menacingly at various places across the state—from Buxar to Bhagalpur. It has overtopped the danger levels at Patna, inundating low-lying areas across along its way, which led to exodus of families with cattle heads from diaras.

In Patna, Bind Toli, one of the most populous helmets inhabited by fishermen located inside the Patna flood protection wall, has been completely submerged under the water, while floodwaters have begun engulfing houses built on upland in diara between Patna and Saran district.

Sitab Diara, the native village of socialist leader Jayaprakash Narayan, situated on the bank of Ganga has been swamped by the flood water and the villager are being relocated to safer places. Many villages settled on the river’s bank in Naugachhiya and Bhagalpur are being devoured by the gushing current of the river. Various villages of Mahnar block of Vaishali have also been submerged due to rise in water level of Ganga.

This is the second spell of the flood the state is undergoing. Earlier, as many as 13 north Bihar districts were inundated by the swollen rivers originating from Nepal and are still grappling with the post-flood tribulations. The floodwaters had swamped more than 1,300 panchayats, affecting more than 88 lakh people due to the spate that started in the last week of June. More than 130 persons had lost their lives in the north Bihar districts due to the floods.

Prompted by the rising trend of Ganga and other rivers in the last 24 hours, the administrative machineries of the districts along the river have been put on high alert to meet the eventualities. Personnel of the State Disaster Response Force (SDRF) have been deployed in sensitive areas of the rivers to keep constant vigil and rush help to the people in need.

Officials of the water resources department (WRD) said that safety embankments of Ganga and other tributaries of rivers of Central Bihar region are being fortified and monitoring heightened in view of the moderate to heavy rains predicted in their catchment areas in the next one week.

They feared that the flood situation may deteriorate in the catchment areas of Ganga as other tributaries like Kosi, Gandak, Sone and Burhi Gandak threaten to cross the red mark at different localities along the way. “Currently, Ganga has crossed the danger level at Gandhi Ghat and Hathidan in Patna, while Burhi Gandak has overtopped the red mark at Khagaria. Sone has begun to swell after a brief reprieve in the morning. Situation is, however, not that alarming as of now,” said an executive engineer of the WRD.

A youth is reported to have drowned near LCT Ghat, opposite Mahavir Vatsalya hospital, after he accidentally fell into the turbulent water of Ganga. A team of SDRF personnel carried out an extended operation to fish out the body, which remained elusive till late evening on Thursday.

Meanwhile, the state government has sought financial assistance of Rs 3,000 crore from the Centre to compensate for the losses in Bihar and its people had to incur during the first phase of flood devastation.