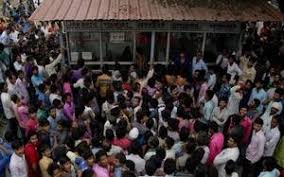 Told to leave Srinagar by security forces and forced to go by local landlords and employers, a group of migrant workers from Bihar found themselves outside the Jammu railway station on Thursday facing an uncertain two-day journey back home.

Ahead of its announcement revoking Jammu and Kashmir’s special status and carving the State into two Union Territories on Monday, the government had begun moving out tourists, pilgrims and outstation workers. With large parts of Jammu and Kashmir under curfew-like conditions since Monday, the group of workers from West Champaran district of Bihar said they were unsure of ever returning to collect their unpaid dues.

Lal Babu Shah went to Srinagar for the first time about a month ago, hoping to stay for four to five months working in construction.

“I used to sell vegetables back at home, but this time the crops had failed, so business was down. I thought I would be able to make some money by working in Srinagar for a few months. I was working in a mosque, laying tiles,” he said.

At 3 a.m. the previous morning, the group of about 30 men said they were all asked to leave their accommodation. They then made their way to the bus stand in Srinagar, where long lines for tickets awaited them.

“The bus tickets were being sold in black by the government officials for a higher amount. The private cab operators were demanding ₹2,000 per person for a trip to Jammu that is usually ₹700. Our employers did not even clear our dues because they said the work was incomplete. We were able to scrounge enough for bus tickets. Now, we don’t know how we will buy tickets to Bihar,” said Lalji Kumar.

Spending six months a year in Srinagar working construction jobs, Mr. Kumar said he was able to make ₹60,000 to ₹70,000 a season, the highest rate anywhere in north India. Now, he said he was leaving with ₹3,000 in unpaid wages.

Having gone through a harrowing few days, both men said they supported Prime Minister Narendra Modi’s decisions on Jammu and Kashmir.

“In two years, the way life is in Jammu, that is how we will be able to live in Srinagar,” said Mr. Kumar, adding he was not sure if he would return.

For Mohammad Arif, who has been going to work in Srinagar for the past 10 years, this time was different. During the violence and curfew after the killing of Hizbul Mujahideen commander Burhan Wani in 2016, he said the situation for migrant workers was not as bad as now.

“They used to hurl insults at us, but now they are telling Biharis to leave. We heard that some people beat up a Bihari worker in Soura,” he said.

Another member of the group, Bhola, said locals would taunt him by saying “come back with a passport”.

While these workers and others like them worried about how they would be able to get back home, the government has announced special trains for them.

Srinagar Deputy Commissioner Shahid Iqbal Choudhary said in a tweet on Thursday that special trains and coaches had been arranged from Udhampur and Jammu “in view of large number of workers including those going home on Eid”, which is on August 12.