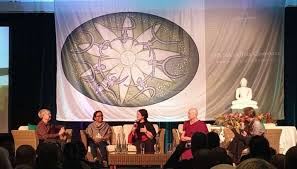 The 16th Sakyadhita Conference, held in the Blue Mountains of New South Wales in Australia, proved to be an uplifting and informative event. Held outside of Asia for the first time in its history this year, the conference drew 800 people from 29 countries under the theme “New Horizons in Buddhism.”

Since its inception 32 years ago under the Bodhi Tree, Sakyadhita has been a conference unlike any other: held by women for women (and non-binary people and women’s supporters). Sakyadhita is an international association of Buddhist women working for women’s issues and bringing women together to build support and mutual understanding about issues that are important to the empowerment and spiritual growth and well-being of Buddhist women.

This year’s conference  was very skilfully organised, with fewer academic papers and more workshops. The papers presented were educational, inspiring, and at times heartbreaking. Jetsunma Tenzin Palmo, a senior Buddhist nun and teacher, described the difference between Sakyadhita and other—more male-dominated—Buddhist conferences she had attended by observing that at Sakyadhita there is no sectarianism, all traditions are given a voice, and more women are empowered to speak out and help one another.

Buddhist superstars including Roshi Joan Halifax, Ven. Lekshe Tsomo (for many years the main impetus and energy behind the conference and a champion of nuns in the Tibetan community and in developing countries), and Ven. Thubten Chodron (abbess of Shravasti Abbey) each gave inspiring Dharma talks.

There was extensive diversity in terms of both the papers and workshops. A beautiful montage of the history of Buddhism in Australia was given. Householder yoginis spoke of the power and embodiment of balancing motherhood and practice. Korean celebrity nuns presented Korean cooking. A married female Western Rinpoche spoke of the profound Tibetan lineages of marriedyoginis and dakinis. Bhutanese nuns and Australian ex-nuns both spoke on the devastating effects of sexual and spiritual abuse by teachers in Buddhism.

Other attendants presented workshops for people from the LGBTQIA community, and many people within this group expressed that they still felt prejudice and marginalization in society and within the Buddhist community. Korean laywomen joyfully shared their Buddhist choir, and women in traditional dress mindfully led a tea ceremony.

After 16 conferences—gathering thousands of women from across the globe—one has to ask: has Sakyadhita achieved its objectives of empowering Buddhist women, creating gender equality, fostering an alliance of Buddhist women, engendering compassionate social action, and promoting the Buddhist teachings?

On the positive side, Buddhist women now know a lot more about each other than they did when they were separated by borders and languages 100 years ago. Sakyadhita has fostered an international sisterhood. In particular, many more prosperous Buddhist women have become aware of female monastics and lay women living in poverty in developing Buddhist countries and have sought to help those women and nuns.

Examples of this include the Jamyang Project, founded by Ven. Lekshe Tsomo, which helps many nunneries throughout the Himalayas receive basic necessities; Dongyu Gatsal Ling Nunnery for Drukpa Kagyu Himalayan nuns, founded by Jetsunma Tenzin Palmo; and the many Sri Lankan and Thai bhikkhuni viharas that have been founded as the ideas of gender equality and the legality of full ordination for women have spread.

There are now hundreds of bhikkhunis (fully ordained nuns) in Thailand, and thousands in Sri Lanka. Although Sakyadhita may not be directly responsible for these ordinations, its members have done a great deal to promote and fund these women and their institutions. Nuns and lay women now have more access to information, opportunities for solidarity, occasional funding, and pathways to full ordination—in part due to the amazing work of Sakyadhita. At the meeting 32 years ago under the Bodhi tree, and at later gatherings, nuns from Ladakh admitted they had hardly any education or support. Now, decades later, there are many schools with nuns studying to be geshemas. Sakyadhita was one of the first Buddhist organisations to hold bhikkhuni ordination.

On the “challenges to grow from” side, only half an hour was dedicated to an issue that has rocked the Buddhist world: the sexual misconduct of many prominent Tibetan male lamas. This has damaged lives, traumatised numerous people, and caused them to lose faith. The whole issue has made many people question the efficacy of a system based on complete devotion to fallible human beings.

Additionally, looking around the conference, although there were so many wonderful women doing amazing work, I could not help but notice that most heads were grey. Like most Buddhist organizations, Sakyadhita is still dominated by the baby boomer generation. Millennial and Gen-Y women are often absent from many of the Buddhist events that I attend, or they are a minority. While Sakyadhita does a great deal to try to be inclusive, a generation gap exists—not just in terms of age, but in understanding the priorities of each generation. Because the boomers are such a large generation who made such radical shifts in culture and change, it is still quite normal for them to dominate and center on themselves. But the world in which Gen-Yers and millennials are growing up is radically different from the world that baby boomers knew.

We now need to question whether civilisation will last beyond the next 20–30 years because of previous generations’ reckless consumption of natural resources and the cumulative damage to the natural environment. Baby boomers are the most prosperous generation that have ever lived. Millennials are burdened by much higher university fees and housing prices, while earnings have not kept pace with the cost of living. Many millennials will never own their own home and question whether it’s ethical or responsible to bring a child into a world with the looming potential of social collapse due to the climate crisis.

When I spoke to one senior nun about the massive effect that the #metoo movement was having on my faith, leading me to question the whole system, and how I wished that they would let the audience discuss it more, she replied: “That’s a topic you personally want to hear, it’s not a topic many of us want to hear, we are sick of it.”

After 32 years, has enough changed for women? Western Tibetan Buddhist nuns still have little support and a 75 per cent disrobing rate, and many nuns and women in developing countries still lack resources and gender equality. Clearly we need to do more than give speeches and present PhD papers. We need to go back to our centers, question male dominance, and support nuns and women from our pockets, not just our mouths.

There is no doubt about the beauty and potential of women coming together to share stories and pool resources. The legacy of Sakyadhita is groundbreaking, especially around rights for Buddhist women in developing countries, the geshema degree for Tibetan nuns and full ordination for Theravada nuns. But as someone sitting on the cusp of being a millennial, who may not grow old, who feels for the children alive today and worries if the society will survive, I can’t help but feel frustrated that patriarchy has not been more efficiently dis-assembled, that Buddhist women in so many places are still poor and not equal, that absolute power in Buddhism has not been abolished, that rapist/abuser teachers are still being defended and idolised. As someone who is losing their future, I am growing impatient with those who talk about using more efficient light bulbs and going vegan when what is needed is something much more radical as a collective. I appreciate the amazing work and solidarity of women from previous generations, but I am also frustrated when I see the world is on fire, yet women in Buddhism are still largely subservient to men.

Why do we go on supporting men whose only agenda is to support and perpetuate the power of other men from their own race? Why after all this horrible abuse and all these women disrobing and being exploited and raped is it considered taboo to question male authority? Why are those who dare to speak up considered too radical and faithless, and therefore sidelined?

Where are the male leaders who claim to love all beings equally? They are most noticeably absent from an international conference on the well-being of half the Buddhist population. The sad fact is that those most noticeably absent are those with the most power in Buddhism. Sakyadhita is groundbreaking and has made inroads that no other Buddhist organisation has been able to make.

In terms of “New Horizons in Buddhism,” I can’t help feeling that we need to be much more radical if we are going to end patriarchy and save the planet. Although the older generation has done some truly remarkable things, they don’t have their finger on the fault lines that my generation is living on, which go much deeper than we previously thought and could tear humanity apart. I hope my generation and those after us will have a future.