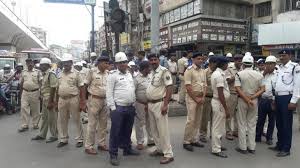 Locals and police clashed on the streets of Patna over the new motor vehicle act after the traffic police tried to fine a woman for not wearing a seatbelt.

The incident happened at around 1 pm at the Exhibition road roundabout in Patna. The woman, who was driving a four-wheeler was caught by the traffic police for not wearing a seatbelt.

A heated argument took place between the woman and the police following which she got support from the local people who then clashed with the police.

“I was going to PMCH when the traffic police stopped me and asked me to park my car. I showed them all my documents but despite that, they said I need to pay Rs 50,00 as fine for not wearing seat a belt,” said the woman.

People started pelting stones after which the police also resorted to lathi-charge to disperse the mob. Thereafter, a massive police deployment was put up at the exhibition road to contain the situation.

“Some people who are agitated with the new MV Act created a ruckus at Exhibition road because of which vehicle movement was stalled in this area. The woman alleged that she was asked to pay a fine for not wearing seat but that is not the case. The local people came out in her support and created ruckus”, said DSP Suresh Prasad.