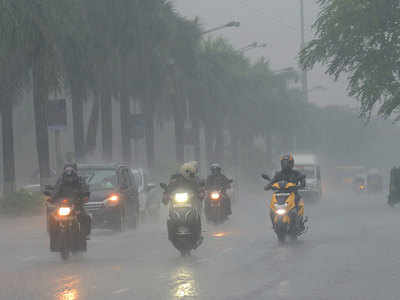 Twenty-two people were killed and seven injured in Maharashtra and Jharkhand in rain-related incidents, even as the dry spell continued in most parts of north India which was reeling under sweltering heat.

At least 15 people, including four children, were killed and two injured in Pune when a portion of the 22-ft high compound wall of a housing society collapsed on adjoining shanties following incessant rains, trapping the sleeping families under the debris, officials said.

The incident took place between 1:30 am and 1:45 am at Kondhwa and the victims were labourers and their family members, a majority of them from Bihar, who were living in makeshift shelters at the under-construction residential project where deep excavation work was underway.

Heavy monsoon rains continued to lash Mumbai and its neighbouring areas for the second consecutive day on Saturday and at least five persons were injured in rain-related incidents, officials said.

The suburban local trains, called the lifeline of Mumbai, remained largely unaffected and were running as per their schedule. However, in view of IMD’s heavy rainfall forecast, the Central Railway (CR) cancelled some express or passenger trains, especially those between Mumbai and Pune.

According to the officials of the Brihanmumbai Municipal Corporation (BMC), 39 incidents of short circuit, 104 incidents of uprooting of trees or falling of tree branches were reported from various parts of the city.

In Maharashtra’s Thane district, two people died of electrocution in separate incidents caused by incessant rains on late Friday night. While the first incident occurred in Thane city, the other one occurred in Ambarnath.

Two people died on Saturday after being struck by lightning in separate incidents in Maharashtra’s Buldhana district, police said.

While Shrikrishna Dhabal (69) was struck by a lightning bolt while working in his field in Sangrampur taluka, farm labourer Yuvraj Gavande (35) died in a similar manner in Jastgaon villege, they said.

Parts of south Gujarat received extremely heavy rainfall Saturday, with the IMD stating that districts in the south and central parts of the state were likely to receive heavy rainfall over the next two days with upper cyclonic circulation formed over the region.

The IMD warned of heavy rains in Valsad, Navsari, Dangs, Surat, Narmada, Chhota Udepur and Vadodara districts over the next two days, adding that upper cyclonic circulation had formed over the south Gujarat region.

Valsad received 130 millimetres rainfall in a 24-hour period till Saturday morning, while Bhavnagar and Vadodara got 52.8 and 34 mm rainfall respectively, IMD data showed.

Heatwave continued to sweep the Jammu region as mercury touched 43.1 degrees Celsius, four degrees above average. Summer capital Srinagar, on the other hand, continued to experience pleasant weather with a high of 29.6 degrees Celsius, up by over two notches but below the season’s average.

Moderate rain and thunderstorm were witnessed at isolated places in Eastern Uttar Pradesh even Banda was recorded as the hottest place in the state, recording a temperature of 44.8 degrees Celsius, which is eight degrees above normal.

Heatwave also swept some parts of the state and Allahabad sizzled at 44 degrees Celsius.

According to the IMD, rain and thundershowers were observed at many places over Assam, Meghalaya, Chhattisgarh, Kerala, North Interior Karnataka and at most places over Andaman and Nicobar Islands, Arunachal Pradesh and Goa.

Extremely heavy rainfall was observed at a few places over Konkan and Goa and Gujarat region, it said.

The Meteorological Department has issued a fresh yellow weather warning for thunderstorm in Himachal Pradesh for July 3. It has forecast thunderstorms accompanied with hailstorm and gusty winds in several parts of middle hills of the state on July 3.

The weather office issues colour-coded warnings to alert people ahead of severe or hazardous weather that has the potential to cause “damage, widespread disruption or danger to life”. Yellow is the least dangerous of all the weather warnings. It indicates the possibility of severe weather over the next few days.

The Odisha government Saturday put all 30 districts in the state on alert in view of the IMD forecasting enhanced heavy rainfall over the next three days. The step was taken after the IMD indicated formation of a low pressure area in north Bay of Bengal and neighbourhood, which is likely to intensify into a depression during the subsequent 48 hours.

“Under its influence, enhanced rainfall activity is very likely over the districts of Odisha,” said H R Biswas, the director of the IMD, Bhubaneswar.